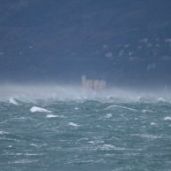 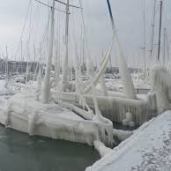 One of Trieste’s natural wonders is its wind know as LA BORA. It is a North to Northeastern katabatic wind similar to the Santa Ana’s in Southern California, the Bohemian Wind in the Ore Mountains between Germany and the Czech Republic, the Barber in New Zealand, the Oroshi in Japan. It rushes down from the mountains and blows in gusts. It can last a few hours or even up to a week. When it occurs with overcast skies and high humidity it is called BORA SCURA (dark Bora) and when the skies are clear, dry and sunny, BORA CHIARA.

You can clearly see signs of Trieste’s respect for the La Bora. Some streets are equipped with chains or handrails to make pedestrian traffic safer. Many rooftops have stones on them to hold down roof tiles and signs are posted along the piers, sidewalks bordering the water and the parking lots warning of the danger of being there when there is BORA. When in Trieste, you might notice on the horizon across the water, the Alps in their snowcapped splendor — all of these things are relevant to the iconic wind that makes up part of the Triestine DNA.

La Bora winds can reach up to speeds equivalent to a Category 4 Hurricane. Here is footage of 2012’s Bora.

As I write this we’ve been experiencing 4 days of BORA, with unrelenting winds reaching upwards of 150kph (90+ mph), aside from damage to roofs, cars from falling trees and roof debris, motorbikes & scooters knocked down, 10s of people have been injured  badly enough to be taken to the hospital and there’s even been two deaths due to the harsh wind — all the while with beautiful sunny skies, see my footage below.

In addition to the obviously more serious consequences of the Bora, the constant howling, blowing, low grumble of the wind tends to wear on the nerves. Walking through it has a tendency to fill you with a blend of excitement and anxiety often leaving you breathless, like when there is a strong lightning storm. It is inescapeable and persistent.

Having lived in Los Angeles for 6 years, my relationship with the Bora is similar to the seismic nature of that area. You expect it, you respect it, you fear it, but it is also unique to your geographic location. It becomes part of your life.