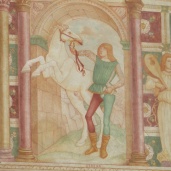 Spilimbergo is a town located northeast of Venice in the province of Pordenone in Friuli-Venezia Giulia. The town is best known as the home of the Scuola Mosaicisti del Friuli (Mosaic Academy of Friuli), which was founded in 1922.

It is definitely underrated and worth the under 90 minute trip from Trieste. Upon our arrival (on a bright Spring day in March), we were greeted by a city decked out in purple tulle and ribbons in honor of the “Violet Festival”.  The city is home to 12,000 residents of which 11% come from as far as Burkina Faso, Romania, Albania, and many other nationalities . 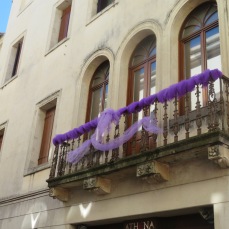 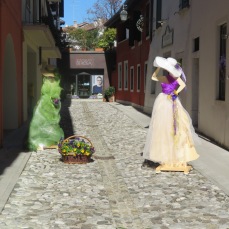 The city is quaint, clean and vibrant and laid out within the outline of the old castle walls. We found the restaurants and cafes bustling with locals. Lunch at Enoteca La Torre was very satisfying; it is a rustic, family-run tavern that serves lovely platters of local cured meats and cheeses accompanied by Friulian wines before a hearty lunch, in our case of “tagliata” (sliced grilled steak) served with a salad and oven roasted potatoes. Fortunately, we booked a guided tour of the city and the mosaics academy for after lunch so we were able to burn off some of those calories.

Simonetta de Paoli, our perfectly multilingual guide, met us in front of the Duomo. Equipped with a ring of keys, she gave us access to all while providing a rich description of the history of the city and a thorough tour of the churches and mosaics academy.

We were impressed by the unexpected richly frescoed exteriors of the several buildings throughout the city. We did not expect to find such a “wealthy” city center so far removed from the larger cities like Venice or Trieste.

The history of Spilimbergo begins around the 11th century, when the Count of Spangenberg, from Carinthia, is called to serve as a vassal to the Patriarch of Aquileia establishing the Castrum de Spangenberg.

In the following centuries the settlement of Spilimbergo, develops both as a military stronghold, and as commercial transit center, witnesses a striking demographic and urban growth thanks to the arrival of “foreigners” such as Lombards, Tuscans and Jews. In 1284, Count Walterpertoldo II, begins the construction of the Cathedral, one of the finest Romanesque-Gothic monuments of Friuli; dating back to that same period are the Palazzo del Daziario (Customs House), the Casa del Capitano and the Loggia (now the town hall). In 1420 the town , along with the rest of Friuli passes to the Republic of Venice.

Despite tumultuous times,  Spilimbergo continues its period of economic prosperity that is also reflected at the cultural level; from the reconstruction of the castle in Renaissance style and installation of the works of famous artists such as Giovanni Antonio Pilacorte, Pordenone, Pomponio Amalteo, Gasparo Narvesa and Renaissance artist Irene from Spilimbergo (for whom the Mosaic Academy is named).

After the fall of the Venetian Republic (1797) Spilimbergo survives the events that marked the Napoleonic era and ends up under the rule of the Austrian Empire in 1814. After the third war of independence (1866) Friuli becomes part of the Kingdom of Italy.

The artistic tradition of the city continues with the founding in 1922 of the Scuola Mosaicisti del Friuli (Mosaic Academy of Friuli) which derives its roots in a centuries-old local tradition. It was in the 1500s that craftsmen from this region started flocking to Venice, where the art of making mosaics – developed in Roman and Byzantine times – flourishes.

Craftsmen from Friuli brought with them the colored stones of their rivers, the Meduna and the Tagliamento, and began to export their skills and expertise to France, the Americas, Australia. The Academy is still thriving today accommodating students from all over the world. 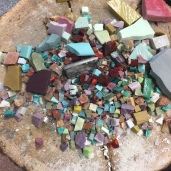 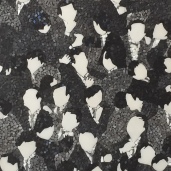 Finally, before making your way out of Spilimbergo, be sure to stop at Arte Dolce di Stefano Venier for an ice cream — it is actually one of the best I’ve had in Italy!! 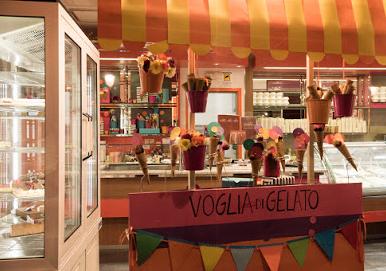