Trieste’s City Hall or Municipio is the most iconic landmark of the City. It presides over Europe’s largest piazza overlooking the sea. It is beautiful in the day and even more so at night, when it is illuminated.

Designed by Giuseppe Bruni,  it was built between 1873 and 1875 on the site previously occupied by the Magistrate’s Palace and Loggia, incorporating some of the original buildings’ internal structures.

Originally, the square was less than half its current size and the Council building was essentially made up of a large hall called “the stove” or Stube, because the first heating stove was set up there. The Council held its meetings there, presiding over legal matters and public auctions. The building was enlarged several times, both on the right and left of the loggia, incorporating neighboring buildings and also hosting the Public Library. Two bronze busts depicting Duke Leopold III of Austria and Emperor Federico III (1415 – 1493) were displayed on the facade of the palace.  In 1871 the old City council hall was in part demolished to make way for Bruni’s construction and in 1919 the busts were removed and destroyed as a result of an ordinance of the new Italian authority. 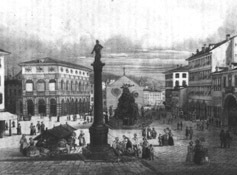 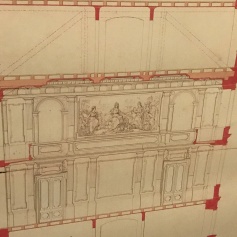 The main building has a clock tower featuring two bronze Moors nicknamed by locals “Michez and Jachez” that were designed by sculptor Franco Asteo.  They were replaced by copies in 1972, and the originals can now be seen at Castle San Giusto. The exterior style of City Hall is very ornate and at the time of completion, was considered quite unappealing often compared to an oversized marzipan confection or Castel del Mandolato.  Only a century later, has the work been recognized as “one of the most notable buildings in the genre that were produced in Europe and in the world at that time” (Firmiani/1975).

Inside, the great Council Hall is embellished with fine wooden furnishings and the allegorical painting “Prosperous Trade of Trieste” by Cesare Dell’Acqua (1877).  This painting depicts Trieste as a noblewoman greeting travelers and traders from the Northern territories and from overseas. The flag of Austria over the train station is small in comparison to an American flag visible in the port – a tribute to the American spirit of independence to which Trieste aspired. The “genie” hovering over the figures represent the telegraph and modernization of communication.  It is also notable that most of the figures in the painting are women, although no concrete explanation is given.

Among the many reception rooms, the Blue Room is principally used to welcome authorities and important guests. Walls and furniture are covered in rich blue and gold fabric. It also features important artwork by Hans Makart , “The Allegory of Navigation” (late 1870s), Makart was a well known influence on Gustav Klimt.

In the end, Bruni  is recognized to have been a  brilliant urban planner, having understood the importance of the positioning and the harmonious integration of the buildings that would come to breathe life into the Municipio and Piazza Unita’ d’Italia, Trieste’s centerpiece.

Tours of Trieste City Hall are available to the public only on special occasions. To find out more check out Trieste Info point in Piazza Unita’.