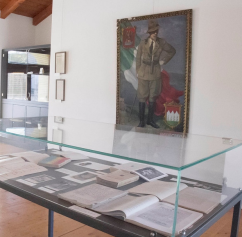 The only reason I have ever traveled to the town of Ronchi dei Legionari is to get to Trieste’s airport. “Ronchi” means cultivated lands and the town was originally called Ronchi di Monfalcone. The name changed came after Gabriele D’Annunzio (famed Italian military man, poet, playwright, journalist, patriot) led 2,000 locals — not part of the regular armed forces (legionari) — to take the city of Fiume (now Rijeka, in Croatia) which was made up largely of Italians,  in defiance of the 1919 Paris Peace Conference.

In fact, there is a museum in Ronchi dedicated to D’Annunzio but it is open only upon request. 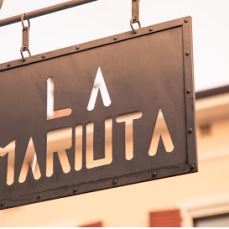 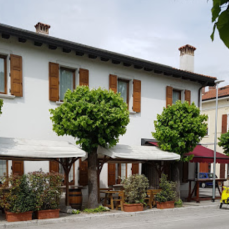 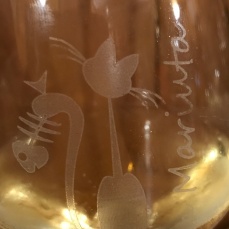 I owe most of my knowledge of Ronchi to Tiziano & Monica – owners of the OSTERIA LA MARIUTA. A friend of mine suggested we try this fish restaurant, which surprised me as Ronchi is more inland than Trieste, so with some scepticism, we went to check it out.

The town of Ronchi is “sleepy” but LA MARIUTA is “jumping”. The restaurant appears to be the heart of the city; bustling with groups of young people, families, couples and senior members of the community, I would venture to say that it is the “dining room” of Ronchi.  Tiziano and his staff are quick to make you  feel at home and the procession of dishes soon begins.

La Mariuta is a legendary restaurant in Ronchi, named for the original owner. Their logo is a clever design which fuses a cat with a wine bottle and a fish. Legend has it that gentlemen would come to Mariuta’s place bringing the spoils of their game hunts. Often what they brought was insufficient to feed the entire hunting party and so Mariuta would compensate with whatever she could find scrambling around the alley behind her kitchen — apparently the stray cat population was effectively reduced this way!!  Luckily for us this is one thing the current owners frown upon….!!! 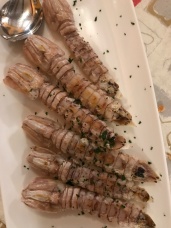 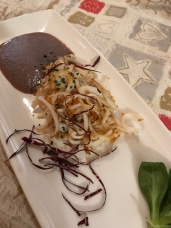 The beauty of La Mariuta is that you can order from the menu or place yourself in Tiziano hands for a journey through a myriad of fish appetizers prepared “family style” to accomodate all the people in your party so that everyone gets a taste.

And this is no ordinary seafood. Aside from everything being incredibly fresh, Tiziano and his staff approach the preparation in an innovative way, employing unusual techniques (try the steamed branzino mousse) to creative and unexpected applications of spices and herbs. Everything is delicious and beautifully presented. The appetizer extravaganza is then followed by a delicate seafood risotto and, if you are not bursting by then, you must not miss the desserts which are prepared in house and are also outstanding. 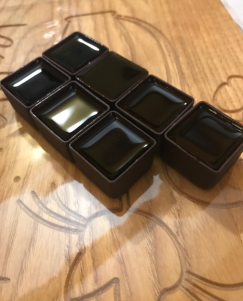 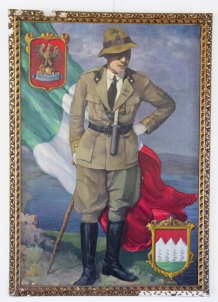 Dinner then concludes with the “Sangue Morlacco” made famous by D’Annunzio, and here we have come full circle: Luxardo cherry liqueur was renamed with the curious name of Sangue Morlacco (Morlacco blood) by the poet Gabriele D’Annunzio in 1919, at the time of the Fiume military expedition, due to its dark red colour deriving its name from the proud people of the Dalmatian hinterland who defended the borders of the Republic of Venice in the 17th and 18th centuries — it is made from sour cherries and Tiziano serves it in tiny dark chocolate boats.  The perfect ending to a perfect meal. And a new reason to visit Ronchi more often.

La Mariuta is planning a renovation and expansion to include a small bed and breakfast in the coming months.