Recognized as one of the forefathers of Italian advertising poster art “Cartonellismo”, Leopoldo Metlicovitz is being commemorated with twin exhibits at the beautiful Carlo Schmidel Museum on the famed Canal Grande and at the sumptuous Museo Revoltella off of the trendy Via Torino. 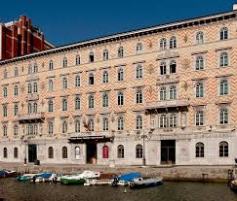 Leopoldo Metlicovitz in his studio at Ricordi

Leopoldo Metlicovitz (1868-1944), a native of Trieste, worked primarily in Milan for the Officine Grafiche Ricordi, a giant in the field of publishing and printing providing theaters, predominantly La Scala in Milan, everything from musical scores to posters. An innovator in the industry, Ricordi had an enormous, 43,000+ square foot facility with fifteen large format lithographic machines, ten lithographic presses and nine chalcographic presses. Under the artistic direction of Adolf Hohenstein (1854-1928), Metlicovitz, Marcello Dudovich (a fellow Triestine already commemorated in a similar exhibit 15 yrs ago) and Giovanni Maria Mataloni (1869-1944),  Leonetto Cappiello (1875- 1942) became the premier poster artists at the end of the 1800s and the start of the 1900s.

The exhibits celebrate the work of Leopoldo Metlicovitz on the 150th anniversary of his birth, and feature over seventy posters.

Metlicovitz was a prolific artist and, while much admired he was very modest and shy and therefore never achieved the same attention, critical acclaim or fortune that his friend-student-rival Dudovich enjoyed. However, Metlicovitz deserves to be recognized in his own right for his contributions and creative genius and thanks to the wide selection of posters on loan from the National Collection Salce Museum in Treviso, this exhibit aims to do just that. 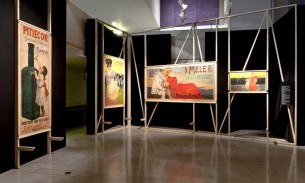 The exhibition, curated by art historian and writer Roberto Curci, is set up in two important museums in Trieste: in The Revoltella Museum, where the ground floor spaces, the Scarpa Room and the fifth floor of the Gallery are dedicated to the exhibit, and in the Carlo Schmidl Theater Museum’s Sala Attilio Selva on the ground floor which is dedicated to posters for operas and operettas .

Son of a merchant of Dalmatian origins (the family surname was originally Metlicovich), at fourteen he worked as an apprentice in a print shop in Udine, where he learned the technique of lithography. It is there that he came to the attention of  Giulio Ricordi, owner of the homonymous Officine Grafiche, who then invited him to Milan to work as a lithographer. For Ricordi he was in-charge of illustrating calendars, opera librettos and postcards. 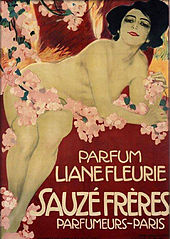 In 1892, after collaborating with Tensi, a company of photographic products, he returned to Ricordi as technical director. At the same time, he entered the theatrical environment and began his career as a set designer and costume designer at La Scala.
Eventually the Mele tailoring company in Naples entrusted him with the task of advertising their garments and in 1906. He went onto win the contest to design the poster for the World’s Fair in Milan, establishing himself as a poster designer and then continued to work with several magazines as an illustrator.

Among his most iconic designs are; the poster of the film Cabiria, a mock-up of the silent film written by Gabriele D’Annunzio, and the trademark that is still used by the Brothers Branca Distillerie, producers of Fernet Branca, depicting an eagle that grabs with its wings spread a bottle of bitter liqueur above a globe.

From 1915 until his death he concentrated on painting, preferring landscape and portrait.

One Ticket is good for one entry at each location to be used on same or even different days.
regular price: 8 euro
discount: 5 euro