(*)DISCLAIMER: This is NOT a Triestine dish but rather, a regional dish belonging to the Friulian ancient tradition, similar to Friulian agnolotti. I had my first taste in Cividale del Friuli at the restaurant, Il Monastero. It was a revelation; here was a seemingly savory pasta dish but with the first bite, I tasted layers upon layers of flavors — a blend of sweet, salty, aromatic and spices. Another time, I had them, they were filled with a beet and potato filling; here again was a sweet earthy packet of doughy goodness that contrasted beautifully with the smokiness of the grated ricotta. To be honest, this cross-over dish reminds me a lot of the Gnocchi di susine popular in Trieste, as they are dishes that can be served as a “primo” (pasta dish) or as a dessert.

Cjarsons or Cjalzons is a very ancient type of stuffed pasta, typical of the Carnia and Timau areas in the province of Udine.

Carnia, which is located along the Italian-Austrian border is dotted with enchanting villages made up of little clusters of stone and wood houses set against an imposing backdrop of soaring mountains peaks and sparkling clear azure alpine lakes. An ideal destination for anyone looking to relax and enjoy nature, it is also a region rich in  history and folklore that is still today actively celebrated, in order to safeguard  and share the most unique and captivating aspects of their heritage so as not to lose it over time.

The first version of the recipe for Cjarsons, then called “Caliscioni” appears in the 15th century cookbook by renowned culinary expert Maestro Martino di Como‘s  Liber De Arte Coquinaria, (one of the benchmarks of early European gastronomical literature, a precious document recounting kitchen etiquette and recipes of the Middle Ages). The fact that they appear in this cookbook demonstrates how this specialty was already recognized as one of the more significant products of the local gastronomic tradition. Some have even surmised that “caliscioni” were a precursor to the macaron. Today, in fact, to protect this heritage, the Slow Food Foundation has chosen to include the Cjarsons in its Arca del Gusto (The Noah’s Ark of Taste) project aimed at promoting and safeguarding typical culinary traditions at risk of extinction. 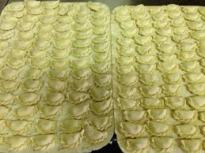 According to an article in Tourism.it, “Cjarsons were generally prepared by women in the early morning, while the rest of the household slept, in anticipation of arriving guests. It was a dish served to observe special occasions, important anniversaries and for the feast of the patron saint, Gertrude. In some areas of Carnia it was even customary to prepare them for funeral banquets, the day of the dead or the ancient procession that went up from Paluzza to the Pieve di San Pietro in Carnia. The recipe also assumed auspicious connotations: it was believed, in fact, that making Cjarsons helped bring about copious harvests and prosperous unions for young couples“.

Typically, Cjarsons are half moon shapes filled with ricotta, raisins, spinach, pears, apples, dried figs, etc.  The dough of the Cjarsons is made with water, wheat flour and salt. Generally they are seasoned simply with smoked ricotta grated over the top, melted butter and cheese. Their peculiarity is that added to the stuffing mixture are tantalizing spices like cinnamon and cloves popular in the cuisine of Carnia. Because the recipe is part of the traditional cuisine of Carnia in both the plains and in the mountain villages, it is possible to find numerous variations of the recipe especially with regards to the filling.  According to the blog, That’s Amore, by Chiara Selenati, the variations on the recipe are many, ranging from sweet, savory to a mix of both – some even include meat. You can check out her article here accompanied with beautiful photos.

The  combination of spices, the sweet and salty notes given by some of the ingredients used for the filling definitely recall the typical Central European influences that often recur in traditional Friulian dishes. It is definitely a dish that lends itself to interpretation and should you want to try to make them, here’s the  original recipe according to the SLOW FOOD Association’s Arca Del Gusto project:

You prepare a rather soft dough and knead it very well.

Instead of rolling it out with a rolling pin, the tradition wants that you roll the dough into small pieces and flatten them using the flat bottom of a drinking glass.

The Filling: They do not specify quantity, so I’m guessing it’s “to taste” and that it holds a decent consistency.

You can also use smoked ricotta, dried figs, cloves, mint, salt, eggs, chard, beets, pears, apples. A spoonful of filling is placed in each of these pasta disks. The dough is then folded and joined together, pressing with the fingers on the rim and making small indentations.

NOTICE: From September 12-15 you can experience the magic that are Cjarsons at the Friuli DOC Food Festival in Udine.