Going to catch the number 9 bus on Viale Mazzini, one passes a building with the inscription Hotel de la Ville. Just the name transports me; I immediately envision corsetted women with elegant bustles and bootlets, with dizzying amounts of laces walking with their moustached gentlemen in top hats and carrying walking canes.

It’s hard to believe that this once bustling social center of the city, with its attractive bas reliefs and wood lined windows in this fantastic location is sadly no longer a hotel. But one can imagine the grandeur and vitality that lived in and around these walls.

Designed by Giovanni Degasperi and built in 1839, it is situated between the famous Palazzo Carciotti and the Greek Orthodox Church and is conveniently located just steps from the Teatro Verdi (Opera house), the Piazza dell’Unita’, the Canal Grande, and Piazza della Borsa. According to my favorite local blogger Daniele de Marco of Scoprendotrieste.it , it was built on the site of the home and chapel of one of the most famous of Triestine families, the Rossetti. The properties were later split up with the main home going to Pietro Sartorio, another famous local businessman entrepreneur.

During his visit to Trieste in 1838, the powerful Prince Chancellor of Metternich complained about the lack of hotels in the center of a busy and growing city as Trieste was becoming under Austrian rule and he set his sights on the Sartorio residence given its privileged location. Sartorio sold to Metternich (his new primary residence became what is now the Sartorio Museum). The waterfront residence was demolished in 1840, clearing an area of ​​1,300 square meters, and the construction of a new 4-story building began.  After just  20 months, the luxurious Hotel Metternich was inaugurated on June 1, 1841 quickly becoming the premiere waterfront hotel of Trieste of that time.

It was renamed Hotel de la Ville in 1848, after a group of rioters destroyed the original sign saying in their defense that “Metternich” was a symbol of  “occupation” of the old Austrian Empire. 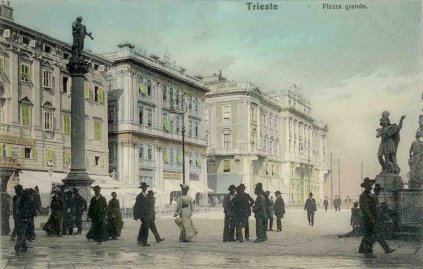 Trieste was in its heyday in the mid-1800s, with a thriving economy, it was becoming a popular destination to a great number of visitors pursuing both business and leisure. The cultural scene was also effervescent and the city saw many venerable personalities coming to lodge at the Hotel de la Ville.  Among them; the King of Greece (Bavarian Prince Otto of  Wittelsbach),  Giuseppe Verdi (world famous Italian composer, who wrote the symphony of Stiffelio in his rooms at the hotel), Gabriele D’Annunzio (soldier, poet, political agitator),  Adalbert Stifter (Austrian writer, poet and painter), Ricciotti Garibaldi (a soldier and Giuseppe Garibaldi’s 4th son) playwright Giuseppe Giacosa,  Eleonora Duse famed stage actress who was romantically linked to Sarah Bernhart, Isadora Duncan and D’Annunzio, not to mention assorted royalty, ambassadors and political figures.

Built with no expense spared, its exterior was covered in local stone from the Karst and decorated with neoclassical bas-reliefs by the Venetian sculptor Pietro Zandomeneghi. On the street level there were the workshops of seamstresses, a milliner and a hairdresser to fulfill the fashion and beauty needs of the ladies. On both sides of the building were the entrances for the carriages which carried guests to the hotel entrance while around the corner were the stables and storage rooms.

Beyond the main entrance, a large double-staircase rose, between marble, mirrors and oil-painted walls, to the fourth floor where the coat of arms of Metternich dominated.

The restaurant, with a large terrace overlooking the sea, was located on the mezzanine level where there were also the administrative offices and nine suites with bathrooms equipped with running hot and cold, fresh or sea water (thanks to a pipe running from San Carlo pier).

The guest rooms and apartments  located on the 3 upper floors were all equipped with stoves or fireplaces and were elegantly furnished with brass or wrought iron beds covered in Swiss linens. The servants’ and valet rooms were located in the attics.

Travelers mentioned in their travel diaries such details as Biedermeier-style furniture, as well as beds with ruffles and canopies and the finest linens. The restaurant and the Cafe Divan offerred their guests sumptuous meals and refined furnishings with silver tableware, bavarian crystal and Viennese porcelain. Over the years, the building was renovated several times and holds two records: in 1884 it became the first building in Trieste with an elevator and in 1910 it became the first building in the city to be equipped with central heating.

In 1911 the hotel was purchased by the Austrian Navigation Union which remained in operation until 1975. A few years later it was renovated and re-fitted for commercial use, becoming the headquarters of Fincantieri S.p.A. .