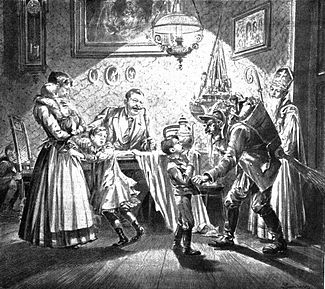 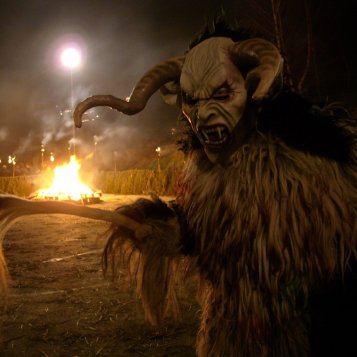 I had just moved to Trieste when Universal Pictures released the horror/comedy film entitled Krampus in 2015.  I had never heard about the story of the Krampus which here coincides with the feast of Saint Nicholas (Dec 6th).

During the month of December, there are celebrations lasting over several days in several of the mountain villages in the nearby area, where Krampuses (or is it Krampi?) come out and parade throughout the towns raising a ruckus, sometimes even attacking and hitting spectators and passersby followed shortly thereafter with an appearance by Saint Nick.

So how do you reconcile the co-existence of Krampus and Saint Nick?

Some say it is a good-cop/bad-cop gig.  As we all know, St. Nicholas rewards good little boys and girls with presents and sweets. Besides the Friuli Venezia Giulia region, several countries including Austria, Bavaria, Croatia, Czech Republic, Hungary, Slovenia, South Tyrol and some other parts of Northern Italy, Krampus travels with Saint Nick. A devilish creature complete with horns, a forked tail, cloven hooves and a thick coat of fur, he is often seen carrying chains and a club or  branch with which to beat naughty children. It is said he might even go so far as to take away their presents and in the worst cases, stuff naughty children in his basket and take them away.

Krampus Night or Krampusnacht falls on the evening of December 5 (the night before the feast of Saint Nicholas on December 6), that’s when the wicked hairy devil appears, knocking on doors of homes and businesses. If you want to keep Krampus on your good side, it is strongly suggested that you greet him with a glass of schnapps.

The origins of Krampus  predate the Catholic feast of St. Nicholas, and may actually have originated before Christianity even reached Europe.   According to anthropologist John J. Honigmann :

The Saint Nicholas festival incorporates cultural elements widely distributed in Europe, in some cases going back to pre-Christian times. Nicholas himself became popular in Germany around the eleventh century. The feast dedicated to this patron of children is only one winter occasion in which children are the objects of special attention, others being Martinmas, the Feast of the Holy Innocents, and New Year’s Day. Masked devils acting boisterously and making nuisances of themselves are known in Germany since at least the sixteenth century while animal masked devils combining dreadful-comic (schauriglustig) antics appeared in Medieval church plays. Austrians in the community we studied are quite aware of “heathen” elements being blended with Christian elements in the Saint Nicholas customs and in other traditional winter ceremonies. They believe Krampus derives from a pagan supernatural who was assimilated to the Christian devil.

The tactic of reward and punishment has long served to to keep children and adults alike in line, so once these northern regions began converting to Christianity, the character evolved into a fairytale used to scare children into behaving, so they’d get presents from “good cop” St. Nick and avoid a beating — or worse — from his “bad cop” partner, Krampus.

For collectors, there is a long tradition of Krampuskarten, the custom of sending Krampus related greeting cards and postcards. Europeans have been exchanging them since the 1800s. Sometimes introduced with Gruß vom Krampus (Greetings from Krampus), the cards often have humorous rhymes and poems. Krampus is often featured looming menacingly over children.

To enjoy a Krampus encounter, you can visit the FVG Tourism site to find out events going on in the region.