Just north of Trieste, next door to Opicina, lies the town of Monrupino (Repentabor in Slovenian *). It is marked by the Sanctuary of the Assumption of the Blessed Virgin which can be seen perched atop the hill overlooking the Karst. This is a popular destination for locals and tourists alike as, from here, you can get beautiful soaring views of the Gulf of Trieste as well as hike several nearby trails.

This hilltop once served as the outcrop of an ancient fortification, then as a Roman castrum and then as a fortress providing defense against the Ottoman raids and Barbarian incursions. In 1512 the Church was built, but over time it fell into ruin. In the mid 18thC it was restored and today you can find murals painted by Clemente del Neri in 1911. 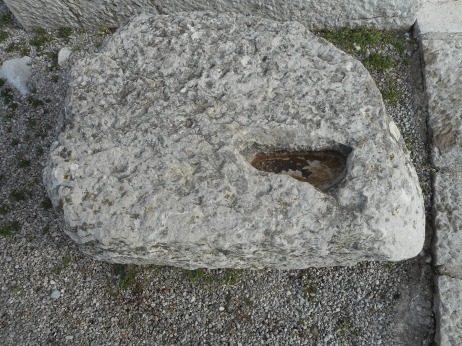 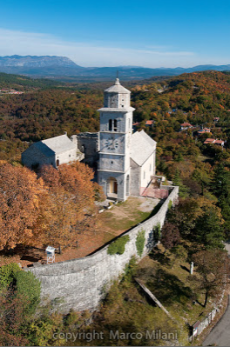 The legend of how the Sanctuary came to be goes like this:  “Long ago a shepherd brought his flock to graze beneath the rocky hill. In the solitude he had the idea of building a chapel on a hill and on the first day he managed to finish the wall. But the next morning he found it torn down. He believed that the devil destroyed it and so he took to rebuilding it, this time, however, on the hill of Monrupino. Great was the sheperd’s surprise when the next morning he found the chapel complete and resplendent. It is said that the Virgin Mary come down from her heavenly abode and stepped on the devil, leaving her footprint on a stone. Soon the locals learned of this miracle and Monrupino was declared a sanctuary. The stone with the mark is still visible on the right of the church’s door — the later church was built near this rock on which the Virgin left a mark. “ Some locals and devotees believe that women with fertility issues can be helped by rubbing their stomach against the stone’s surface to encourage motherhood.

Every two years, the church is used for the Nozze Carsiche (Kraška Ohcet in Slovenian) — the traditional Karst Wedding. 2018 marked the 50th anniversary of the event. 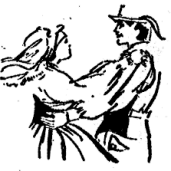 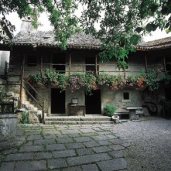 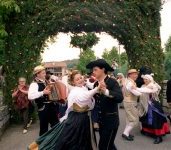 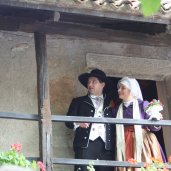 The wedding is a 4 day celebration that takes place at the end of August and is a renactment of historic and important Slovenian wedding traditions. Traditionally, a local couple of Slovenian origin was actually married in the ceremony (which had been the case since 1968). In recent years, due to lack of willing couples, the celebration had come to a halt. However, in honor of the 50th anniversary, the town decided to go forward with volunteers without officializing the wedding. From Thursday to Sunday visitors can attend the “stag” and “hen” parties, and watch the groom-to-be serenade his betrothed. Then there is the transport of the bride’s dowry to the groom’s house and, finally, on Sunday, a true Karst wedding  in which people take part dressed in traditional folk costume. The wedding ceremony takes place in the church and then the guests parade on foot to Repen, where in the Karst House they can witness the bride’s delivery into the groom’s family.

The Karst House dates back to 1831 and has been restored and filled with original furnishing (via donation by local families) dating back to that time. It is quaint and definitely worth a visit to see how life in the Karst once was. It is now a museum and exhibition space.

(*) I’m always curious about name origins and what they mean and where they came from. The following is translated from the Town Hall website of Monrupino/ Repentabor: The town of Repentabor (Repen) derives its name from the noun “repa” (italian= rapa in English = turnip), as is confirmed both by ancient documents and by oral tradition. The latter is based on the following legend, still alive in the local community: “At the time of the Turkish invasions the inhabitants took refuge on the Tabor  (Rocca di Monrupino), from there they threw everything they had on the Turks and when at last when theyhad nothing left, they started throwing the turnips at them. “ Of course this is a humorous and popular lore but it certainly does not correspond to the truth. In fact the first written source that deals with the place is dated 1284 and is therefore antecedent to the Turkish invasions. The documents of the time mention the merchant Johannes Rapin, originally from Repen. The name of the settlement derives from the surname Rapin, in Slovenian Repar. Also Dr. Pavle Merkù (local expert on Slavic studies) gave a similar explanation of the origin of this name: “France Bezlaj (Slovenian linguist) derives the name of the country from the name of a person Repa, of ancient Slavic origins – and Slovenian. This name was widespread throughout the Slavic world and also in the obvious proof given to us by some patronymic surnames derived from this name: Repin, Repioe, Repini etc. This surname gave rise to the toponym Repen, which means nothing but “country founded by Repa”, “country of Repin “. Matija Sila, an enlightened parish priest who gave his services on Tabor from 1879 to 1894 and wrote the history of the place, gathered anecdotes, kept a diary and more, but gave a totally different explanation. From the parish register STATUS ANIMARUM of the year 1827, which Sila edited and integrated, we quote the following motivation: “Reppen is a small town in Prussia, once inhabited by the Sell.” Later: “It is possible that Repen has the same root of Rjabnje in Russia, from the term” rjabòj “, ie” face disfigured by scabs and abscesses “, then Rjaben (from which Rjepen),” rough place, strewn with stones. “ Repen is one of the rare Karst countries to be divided into four quarters or “ku’te” (angles, cantons), as we use to call them. The probable reason is that the country gradually formed around its main nucleus. Until the mid-twentieth century, there was a large pond (buried in the years 1949-1950) from which the toponym of this part of the country derives: P’r kale (near the pond). Next to the pond there were the countryside, two “komunske štjerne” (it municipal wells) and a small square in which the streets flowed from all directions. The four parts or districts each have their own name: Laz’rske ku’t – the southern part of the country, Gab’rske ku’t (also Gabrouske or Gabrouca) – west side, Škab’rske ku’t – to the north, Nebješke ku’t – east part of the country.